The things you didn't know about Judo

Ever heard of Kosen Judo?

Kosen Judo is an offshoot of ‘Kodokan Judo’ (Judo which we practice) and has a bigger focus on Ne Waza.

The rules allow Judoka to enter Ne Waza without trying to throw their opponent and stay there for a lot longer.

Kosen Judo was the inspiration and development behind Brazilian Jui Jitsu.

Judo History. Everyone knows who Jigaro Kano is, but do you know Kyuzo Mifune?

Kyuzo Mifune has been categorized as one of the greatest exponents of the art of judo after the founder, Jigaro Kano. He is considered by many to be the greatest judo technician ever.

As a child, Kyuzo Mifune was extremely obstinate, always finding himself into some kind of mischief or organizing others into similar predicaments. Kyuzo Mifune’s father was a strict disciplinarian and by the time Kyuzo Mifune was 13, his father had had enough of the boy and sent him to a junior high school at Sendai, in northern Japan. As luck would have it, Kyuzo Mifune discovered judo at the school and would become dedicated to the art for the rest of his life. When he was 14 years old he entered a high school tournament and he was able to defeat 9 opponents in a row at that one tournament alone.

At the age of 30 he achieved the nickname ‘the god of Judo’.

Kyuzo Mifune’s reputation continued to grow. When he was 40 years old Mifune was challenged by a 6 foot tall, 240 pound sumo wrestler. Mifune was only 5 feet 2 inches tall and weighed barely 100 pounds. Kyuzo Mifune was finally able to slam the wrestler with his trademark ‘airplane’ throw (kuki nage or sumi otoshi) and he won the match.

Kyuzo Mifune was promoted to Judan (10th dan). He was the fourth of only 15 judoka to ever receive this honour.

Did you know there are two principal ways of practicing Judo: Kata and Randori.

Through Kata practice, trainees learn the principles of techniques.

When you work towards your Dan grades (black belts), you are expected to learn and demonstrate different Kata’s to achieve your new grade.
Here is Olympic and World Champion Kosei Inoue (now Japan’s head coach) demonstrating Nage No Kata at all Japan Open (his brother is his Uke).
Learn more about Kata … click here.

Why does the Judogi top wrap left over right?

Judo originated from traditional Japanese Jiu-Jitsu and Jiu-Jitsu was practised by Samurais.

Samurais would carry a little sword on the inside of their jacket (in case of an emergency) and might need to draw it quickly.

Most people are right-handed and samurai’s would use their right hand to draw their sword from the inside of jacket on the opposite side.

For ease and speed this means they would have folded the left side of their jacket over their right.

Judo has continued with this tradition. In a practical sense this works for the sport also – most people are right-handed and grab the lapel with the right hand which is on top.

Thus the wearing of the judogi jacket should always be left over right.

I am sure you all know there are different badges in scouts, gymnastics or swimming, there are badges in Judo also.

In Judo you can wear badges on the skirt of your jacket, the left lapel, top of the arm (near the shoulder) and on the back (back patch).

The lapel badge is always reserved for your highest representation.

So initially you may start with your club badge on your left lapel. If you progress to fight in a competition representing your county, area or country you would earn the right to wear the relevant badge. These badges would then supersede the Club badge and take its place on the lapel (this is why we put our club badge on the arm, so you always have club plus your highest honour).

On the bottom of your jacket, along the skirt, you can put your mon badges, BJA membership badge or any other Judo badges.

The Back Patch
Continuing on from our badges we will look at the back patches, not all back patches are created equal!
It is required that all athletes must wear a back patch when competing on the IJF (International Judo Federation) tour.
The back patch itself consists of the Judoka’s name (similar to a football shirt), the country they represent and space for the official competition sponsor.
All Judoka start with a white back patch, blue border and white writing.
We believe that you should earn the right to wear one of these back patches by representing your country. However not all Clubs have this rule, and as the back patches can be ordered off the internet you will see children wearing them at low-level competitions!
The colour of the back patch does change to honour major Championship titles…
Judoka who win a World Championships are awarded a Red Back Patch to signal they are the current World Champion. If you do not retain your World title you have one month to remove it from your competition Gi and return back to a blue back patch! Which may seem a bit harsh, but at least you are able to keep your medal … 🤣
Olympic Champions are awarded a Gold back patch to wear whilst they are current Olympic Champion.
This year in Dusseldorf Grand Slam Two Olympic Champions fought each other in the competition.
Shohei Ono (u73kg Rio Olympic Champion) beat Fabio Basile (u66kf Rio Olympic Champion) in the quarter-final of the u73kg category.
It is not often two current Olympic Champions fight each other in competition. It is also one of the dream matches for the Tokyo Olympics (if it goes ahead). 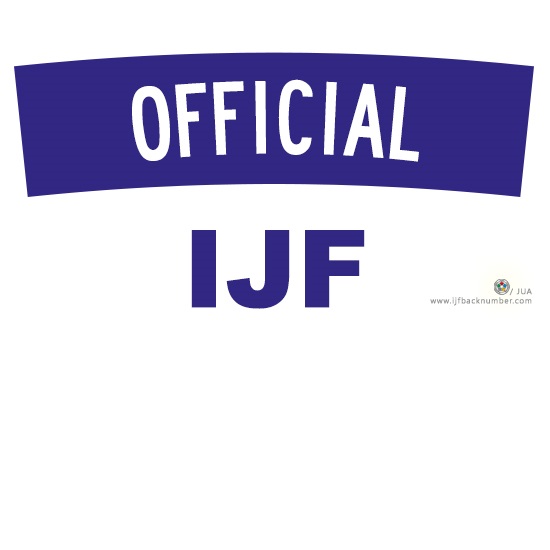 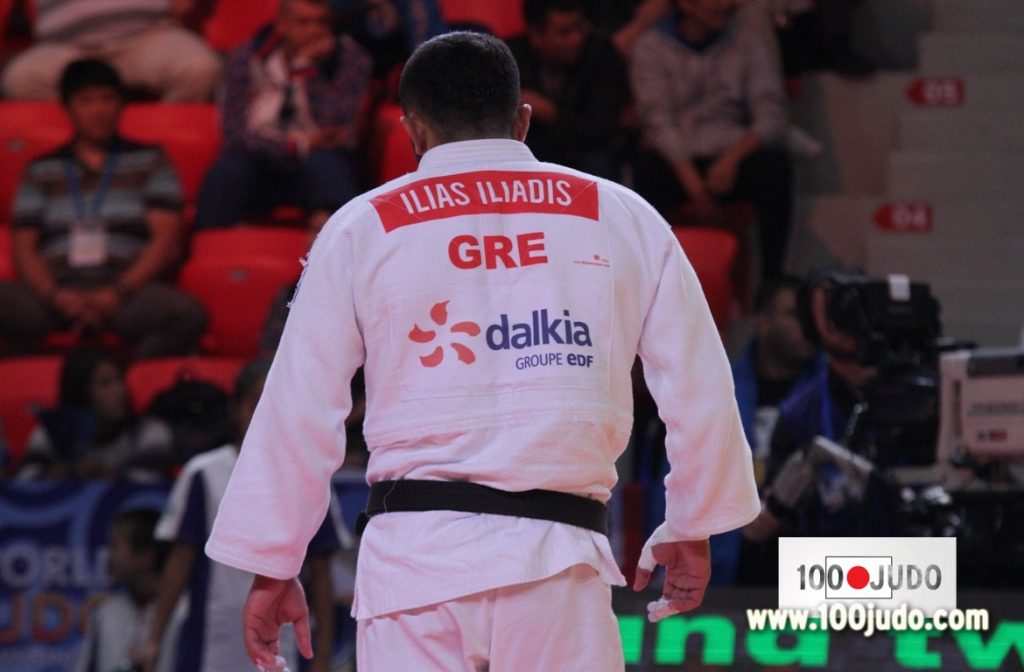 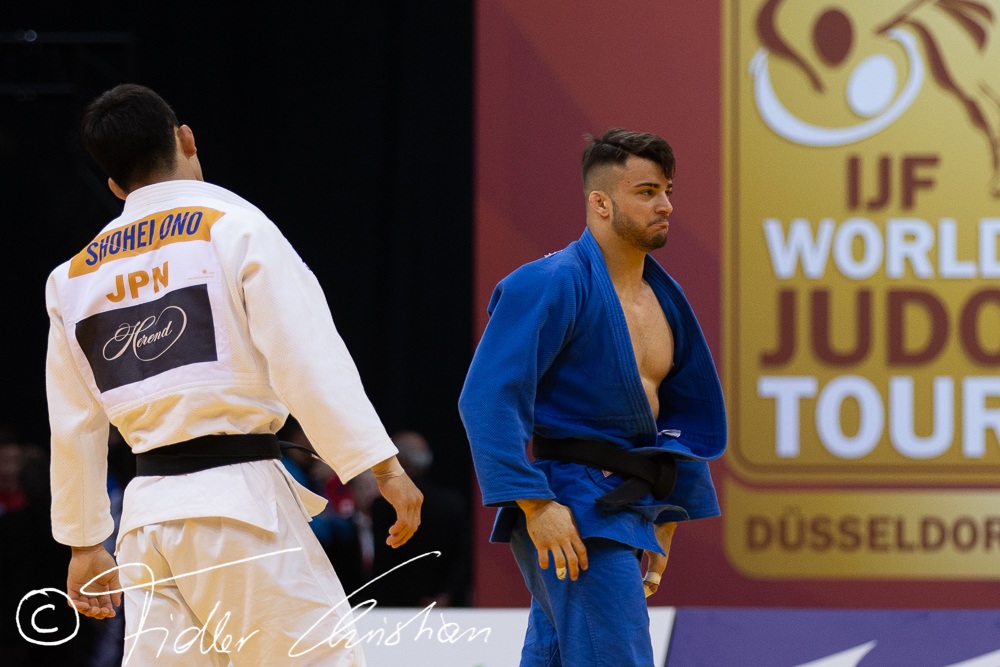 Do you know if your Judo suit fits?

In most international level competitions the fighters will have to wear either a white Judogi (Judo suit) or blue Judogi depending on where their name is on the draw (contest sheet).

Traditionally Judo suits are all white, and in Japan most Dojo’s only allow their own members to wear white suits still. In recent years they have accepted that many foreign visitors will wear blue judogi’s though.

The blue Judogi was brought in for the purpose of being more visual for spectators and TV. Japan was resistant to the change as it was moving away from the tradition of their national sport. Previous to the introduction of blue suits, both competitors wore white suits and were only distinguished by wearing either a white or red belt.

There are very strict rules in competition about the size of the Judogi and also any displaying of sponsorship logos.

Top level fighter will have their favourite Judo suit that fits snug to reduce the amount of loose material that the opponent can grip. However, at high level events each competitor must pass through a Judogi control where officials measure the size of the jacket and trousers to check it is regulation. Too small and you will be eliminated from the whole competition and your coach will no longer be able to coach any one for the rest of that day!! You do get an opportunity to have your kit unofficially checked before Judogi control, if it is too small you can borrow a bigger off the peg one, which is a better outcome than disqualification, but still a tactical & psychological disadvantage.

At lower level and domestic events the referee will check the size of the suit by eye. If it looks too small the competitor will be asked to hold both arms up straight out in front of their body, the sleeves should touch the wrist bone. The trousers should be just above the foot, so touching the ankle bone.